فهرست
Have you ever thought of the idea that all the events that happen today, will happen again in exactly the same way at some time in the future? The idea that time has a circular structure (περί-οδος, period), was an idea common to the Greeks. Most of them believed that the Cosmos was never created and will never perish and that time has no beginning and no end. Time moving in a straight line, with a beginning, middle and end, is something that has emerged in the Western World through Christianity. But if the Cosmos moves through vital circles and every new world that is born from the previous ones, is made through the combination of their material, there is a very small chance the world to be as exactly the same as a previous one from the past. Given now that time is infinite, there is a chance of this same world to be repeated not one, not two, not three, but INFINITE times. Zeno of Citium (On the Cosmos and On Being) summarised the big circular time of the Cosmos as follows: "During the fatal periods, the whole universe gets fire (ekpyrosis-eradication) and therefore begins a new cosmic composition (paliggenesia-swallowing). Everything ends with a primitive fire, like a seed, which has within it all the reasons and all the causes of the beings that existed, exist and will exist. The creation of the new world (apokatastasis-restoration) from the general ignition of matter is completed when the fire, through the air, will be converted into water and part of that water will be stored to create the earth." This stoic view of the Cosmos derives mostly from the Herclitean view that states: "This Cosmos (world-order), the same of all, no god nor man did create, but it ever was and is and will be: everliving fire, kindling in measures and being quenched in measures. (Heraclitus) The idea of Eternal Recurrence is presented in modern times in the philosophy of Friedrich Nietzsche. 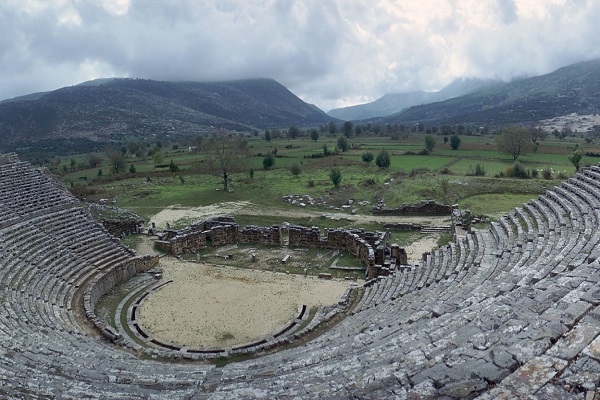